Unfortunately this event has had to be cancelled

Drop in to explore the heritage of Ardross area, with display and resources created in 2021 by a local project run by ARCH, and a slide show of pictures. Explore Ardross Church (now Ardross Ark), erected by Charles Dyson Perrins in 1899 as thanksgiving for the recovery of his first wife after serious illness. It was fitted with electric lighting and heat, with  some early fittings still surviving. MHG16665

Children welcome if with adults 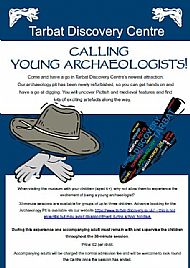 Calling Young Archaeologists! Our Archaeology Pit has been newly refurbished, so you get hands on and have a go at digging.  You will uncover Pictish and medieval features and find lots of exciting artefacts on the way. Children must be supervised by accompanying adult. Only 3 children in the pit in each 30 minute session. Sessions can be booked online – recommended but not essential. Children and adults are welcome to visit the museum after the session.

Children must be supervised by an adult

Bookings via the booking form on our website https://www.tarbat-discovery.co.uk/booking-form-childrens-archaeology-pit

Exploration along the shore between Letters and Ardindrean, led by Cathy Dagg. We'll share stories and memories, and record archaeological and historical features. We will be meeting at Clachan church to look at old maps, photos and artefacts before we set off.

Visit the beautiful 18th century church (MHG8648), walk around the graveyeard and see the preaching ark and Pictish stones.

Dogs if on lead

Join us for a tour of Leanach cottage as we explore how the house has changed through time - What you can tell from the fabric of a building and what is next for the little cottage on the battlefield.

Join prehistorian Dr Alison Sheridan for an online talk exploring the extraordinary tale of a Mesolithic harpoon head found on a beach near Arisaig over 50 years ago. Excitement, rejection, persistence, happy ending: it’s all there! – as is a discussion of how this beautiful and remarkable object fits into our wider picture of Mesolithic Scotland.

Online talk by Michael Gallon for Fortrose and Rosemarkie Local history Group. Michael will share his 40 years of metal detecting experience in the Highlands including his search for buried treasure in Fortrose.

The talk is open to all members of the Fortrose and Rosemarkie Local History Group. Membership is £5 per year. Details on how to join is on their website. Members will be sent details of the link, meeting id and password before the event.

Three online talks showcasing recent work on grave finds in the Highlands, undertaken as part of the Boundaries Objects Project and showcased on Canmore in Context. Bookings via Eventbrite

1. Six heads are better than one?

3. ‘Mr and Mrs Culduthel’: two rather interesting individuals from c 2200 BC

Matthew Knight is a Senior Curator of Prehistory at National Museums Scotland, responsible for the Chalcolithic and Bronze Age collections. He can frequently be found obsessing over bits of broken bronzes whilst at other times he is fascinated by older objects in later contexts and the interactions of past populations with their own past. These interests have culminated in two recent books, the first an edited volume: Objects of the Past in the Past (2019, Archaeopress); and the second a monograph: Fragments of the Bronze Age (2022, Oxbow Books).

Adrián Maldonado is the Galloway Hoard Researcher at National Museums Scotland and author of the recent book Crucible of Nations: Scotland from Viking Age to Medieval Kingdom (National Museum of Scotland, 2021). He obtained a PhD from the University of Glasgow in 2011 on burial and Christianity in early medieval Scotland, and previously lectured in archaeology at the universities of Glasgow and Chester before joining the NMS as Glenmorangie Research Fellow (2018-2021).

Cecily Spall is a director of FAS Heritage and the Tarbat Discovery Programme. She co-authored the research monograph on research excavations around St Colman’s Church – ‘Portmahomack on Tarbatness’ – published in 2016 by the Society of Antiquaries of Scotland and now freely available online:  Portmahomack on Tarbat Ness: Changing Ideologies in North-East Scotland, Sixth to Sixteenth Century AD | Open Access E-Books (socantscot.org) .

Dr Alison Sheridan FBA FRSE FSA FSAScot AcIFA Corr FDAI is a retired Principal Curator of Early
Prehistory (where she was part of the curatorial team that created the Early People gallery in the
National Museum of Scotland) and now Research Associate with National Museums Scotland,
Edinburgh. She has specialised in the Neolithic, Chalcolithic and Bronze Age of Britain and Ireland
and has written and lectured extensively about the Mesolithic-Neolithic transition and about 4 th to
2nd millennium BC material culture. You may have seen her on Time Team, Meet the Ancestors and
Digging for Britain…and on Harry Hill’s TV Burp, as TV Expert of the Week! She was President of the
Prehistoric Society 2010–2014 and is currently a Vice-President of Archaeology Scotland and a
member of the Board of Trustees of Urras nan Tursachan, the Calanais Stones Trust. In 2018 she
was awarded the British Academy’s Grahame Clark medal for prehistoric research; in 2019, the
Prehistoric Society’s EUROPA prize; and in 2020, she was voted Current Archaeology’s Archaeologist
of the Year. In 2019 she was elected a Fellow of the British Academy, and in 2020, a Fellow of the
Royal Society of Edinburgh. She delivered the 2020 series of Society of Antiquaries of Scotland Rhind
lectures on Neolithic Scotland (https://www.socantscot.org/event/rhind-lectures-2020/). In 2018–19
she was Principal Investigator on an AHRC-funded Network Project looking at gold in Britain’s
auriferous regions, 2450–800 BC, and has been a member of several national and international
projects including the Beaker People Project and Projet JADE.